The goal of this project is to determine if small-scale removal of invasive, hybrid cattails can improve abundance and diversity of plants and fish on Minnesota lakeshores. 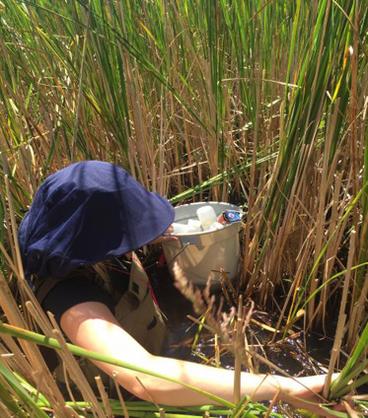 Native broadleaf cattail evolved to co-exist with other native plans, but invasive, hybrid cattails can replace diverse native nearshore plants that are important food and habitat for fish. A hybrid cattail-dominated shoreline can result in a lake with fewer fish (not good for anglers), reduced diversity of fish species, and a not-so-healthy nearshore ecosystem. 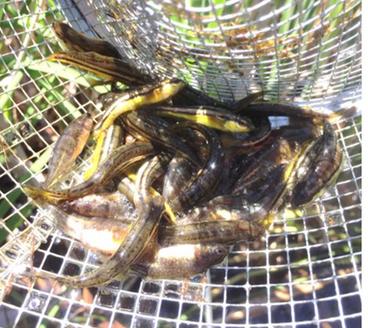 The scientists and students on this project are removing hybrid (Typha x glauca) cattail from up to 24 nearshore lake ecosystems. Hybrid cattails have expanded their range and altered Minnesota lakeshores.

The research team will compare plant and fish abundance (e.g., minnows, pictured here, and other small fishes) and diversity along lakeshores where they removed hybrid cattails.

The project team notes that cattail removal is not appropriate in every environment.

+
What is a Cattail? 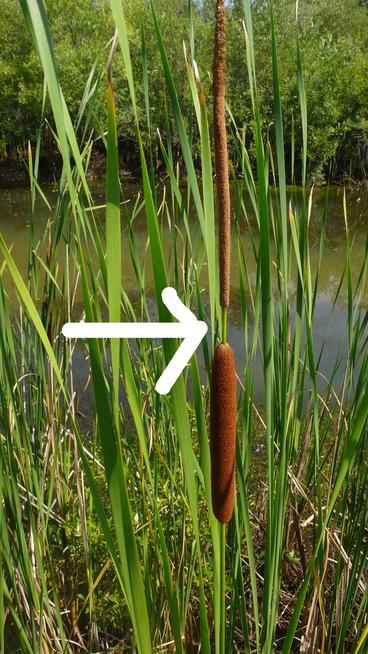 Cattails are tall, reedy marsh plants found mainly in temperate and cold regions of the Northern and Southern hemisphere. Cattails live in fresh to slightly brackish water and are considered aquatic or semi-aquatic. They are important to wildlife and some species are cultivated ornamentally as pond plants. These tall upright plants emerge from creeping roots called rhizomes. Each stalk contains male flowers at the top and female flowers just below. The long, flat leaves of the common cattail (Typha latifolia) are used for making mats and chair seats. 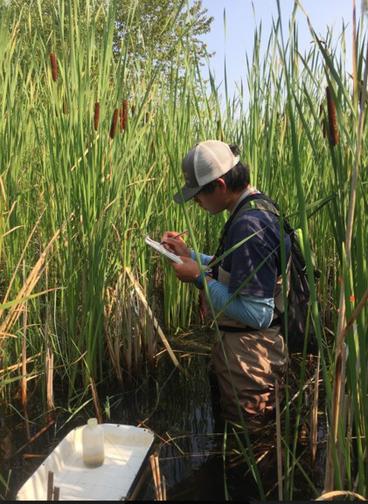 Cattail acts as an ecosystem "engineer" by outcompeting other nearshore plant communities and eventually creating an environment dominated by tall, dense, difficult-to-penetrate cattail and its litter (dead cattail).

You can identify a hybrid cattail by the size of the "gap" (identified by the white arrow in the image) between the upper male part of a cattail and the lower female part (which looks like a hotdog on a stick). If there's a noticeable gap - you likely are looking at a hybrid cattail.

This project will fill a critical information gap by contributing to an understanding of the effects of cattail removal on littoral zone (lake zone) plant and fish communities in Minnesota's inland lakes and account for the possibility of regional differences in these effects. The study will provide ecological data on current (2021) cattail management strategies. It will also inform resource managers about the benefits and costs of localized cattail removal on Minnesota lakeshores. One of the problems with cattail is that it can eliminate the combination of floating, submerged, and emergent plants that are beneficial for fishes.

The 24 lake sites will be selected from across three Minnesota ecoregions that all have  encroaching hybrid and narrowleaf cattail. Cattail-retained and cattail-removed sites will be compared by measuring environmental variables such as plant and fish community metrics before and after cattail removal treatments. These before and after outcomes will help the scientists and students determine if cattail removal positively or negatively affects environmental variables and plant and fish communities and how this effect varies regionally in Minnesota.

Lake littoral zone vegetation is critical for fish species as it provides spawning areas for adults (e.g., bass, pike, sunfish, etc.), nursery areas for larvae and juveniles, cover from predators, and habitat for macroinvertebrate food sources (Hall and Werner 1977, Conrow et al. 1990, Hanson et al. 2015).  Many important forage fishes (e.g., minnows, logperch, darters, etc.) depend on these nearshore, vegetated habitats throughout their lives and whole-lake studies show that vegetation can predict fish presence (Randall et al. 1996, Brazner and Beals 1997, Midwood and Chow-Fraser 2012).  However, it is not only the presence of vegetation that is important for fishes. As the structural complexity of aquatic macrophyte communities increases, with a mix of floating, emergent, and submerged plant types, fish tend to be more abundant and diverse, providing ecological and angler benefits (Tonn and Magnuson 1982, Conrow et al. 1990, Höök et al. 2001, Henning et al. Farrell 2014).

In Minnesota lake littoral zones, hybrid (Typha x glauca) and narrowleaf (Typha angustifolia) cattail have expanded, altering environmental conditions and displacing other plant species. Cattails replace diverse wetland and aquatic plant communities with a more homogenous environment dominated by tall, dense, difficult-to-penetrate cattail and its litter (dead cattail). This homogenization or sameness of plant communities leads to sameness of habitat and detrimental effects on other animals, including fish. Dense cattail communities reduce fish foraging efficiency, reduce their growth, and reduce their habitat. They even affect a fish's ability to breath because oxygen tends to be reduced in cattail stands.

Narrowleaf cattail is ubiquitous and readily crosses with native broadleaf cattail to produce an aggressive hybrid. This makes prevention, early detection, and eradication not feasible management objectives. However, localized cattail control and suppression can help and are key components of an asset protection approach that prioritizes conservation of important habitats.

Studies have shown that when cattail is mechanically harvested, plant diversity increases, especially in younger cattail stands where intact seed banks are still in place. Similarly, excavation of channels (see image at left) through areas of dense aquatic vegetation has shown promise as a method to increase fish diversity. Fragmenting dense plant stands increases edge habitat that fish often prefer, allows increased oxygen from open water areas into oxygen-depleted littoral zones, and provides opportunity for native plant regrowth. For these reasons, localized cattail suppression has been suggested as a strategy to support plant diversity and fish communities, including gamefish that depend on littoral production of forage fish.

Despite the negative impacts of dense cattail and the potential benefits of its removal in many habitats, in some inland lakes, cattail removal could be ecologically detrimental. For example, in southern Minnesota lakes where other plant species have been lost and the native seed bank depleted due to intensive agriculture and other disturbances, cattails provide vegetated habitat and shoreline stabilization that may not be replaced by other plants coming in where cattail has been removed.

The potential costs and benefits of cattail removal are likely to be context-dependent and in Minnesota to vary by ecoregion based on differences in overall levels of environmental disturbance and capacity for regrowth of non-cattail macrophytes (i.e., more intact aquatic plant communities are found in the Northern Lakes and Forests and North Central Hardwood Forests ecoregions than in the Western Corn Belt Plains ecoregions; Bajer et al. 2016, Larkin et al. In press, Fig. 1). Thus we propose testing the ecological effects of fragmenting (adding a channel to) dense cattail stands through field experiments that are replicated in the three major ecoregions of Minnesota to provide a more robust scientific foundation for guiding cattail management.

This project supports Sea Grant’s mission to enhance the practical use and conservation of coastal, marine, and Great Lakes resources in order to create a sustainable economy and environment.

The project is expected to fill a critical information gap by contributing to an understanding of the effects of cattail removal on littoral zone (lake zone) plant and fish communities in Minnesota's inland lakes and account for the possibility of regional differences in these effects. The study will provide ecological data on current (2021) cattail management strategies. It will also inform resource managers about the benefits and costs of localized cattail removal on Minnesota lakeshores.

+
What have we done lately? 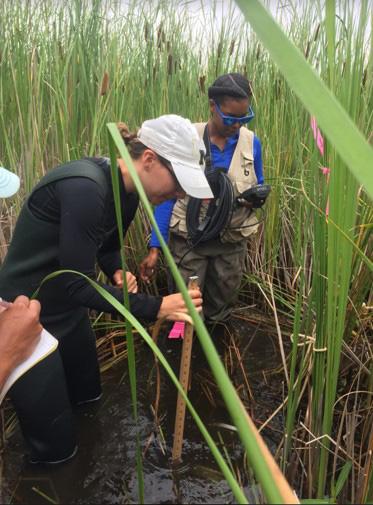 The target audiences for this project include researchers and managers throughout North America who work with cattail and landowners whose recreation and lakeshore views are inhibited by dense cattail growth.

Project collaborators and participants include: 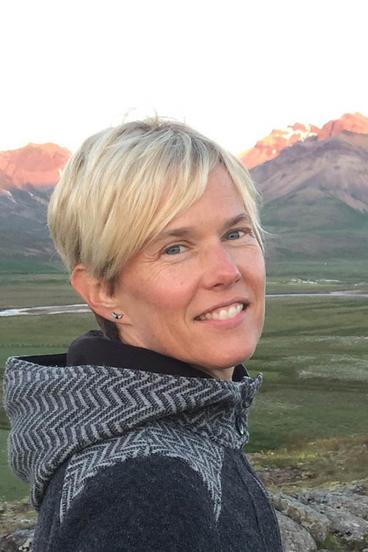