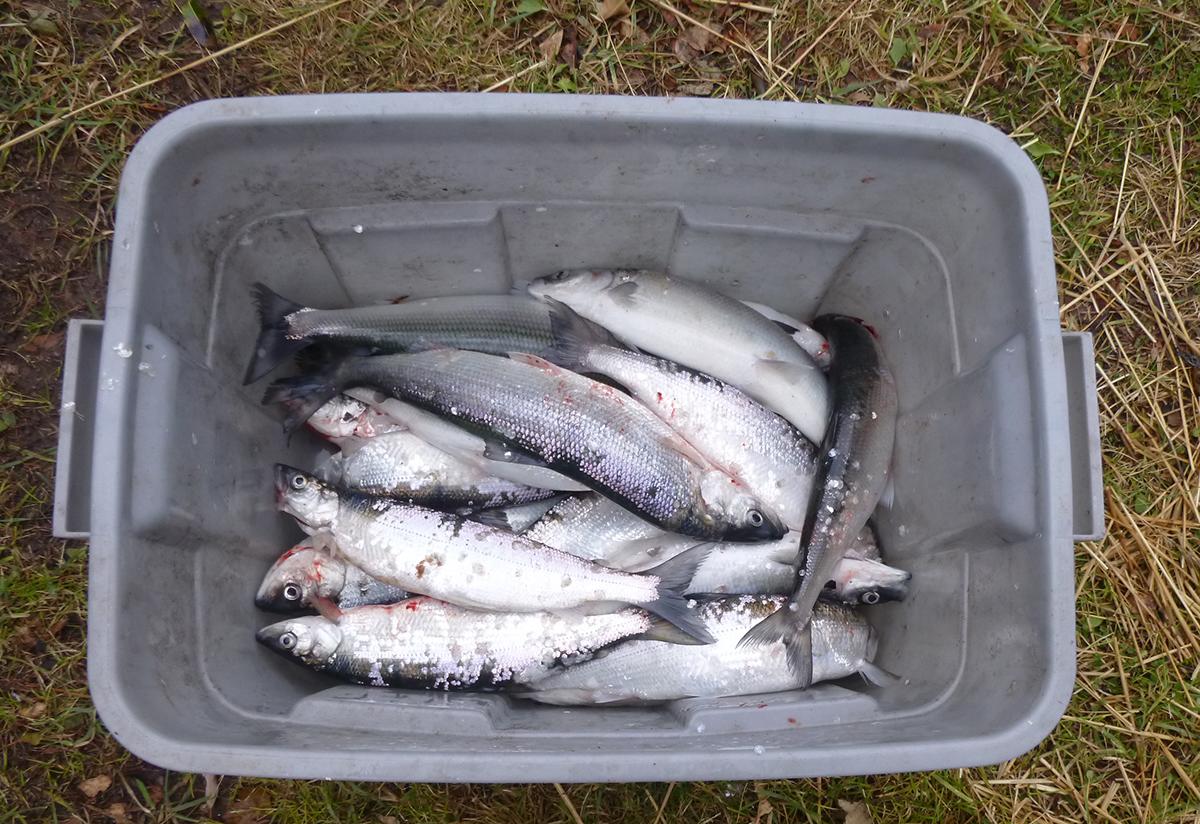 The goal of this project is to investigate which processes affect the survival of larval (young) Cisco to mature adults (recruitment). Specifically, the research team will be investigating the biotic (e.g., biological factors like food availability, abundance of competitors or predator species) and abiotic (e.g., non-biological factors such as climate conditions, winter duration, water temperature, and nutrient loading) processes that are linked to recruitment of Cisco.

Project Goal: The goal of this project is to investigate which processes affect the survival of larval (young) Cisco to mature adults (recruitment). Specifically, the research team will be investigating the biotic (e.g., biological factors like food availability, abundance of competitors or predator species) and abiotic (e.g., non-biological factors such as climate conditions, winter duration, water temperature, and nutrient loading) processes that are linked to recruitment of Cisco. Understanding these biotic and abiotic factors (also called drivers) of Cisco recruitment can identify possible management actions to promote Cisco restoration (e.g., control of non-native predator species), and help set expectations for Cisco population abundance and harvest potential under future conditions. Additionally, the methods developed by the researchers will provide powerful tools that could be applied to other species in other systems. 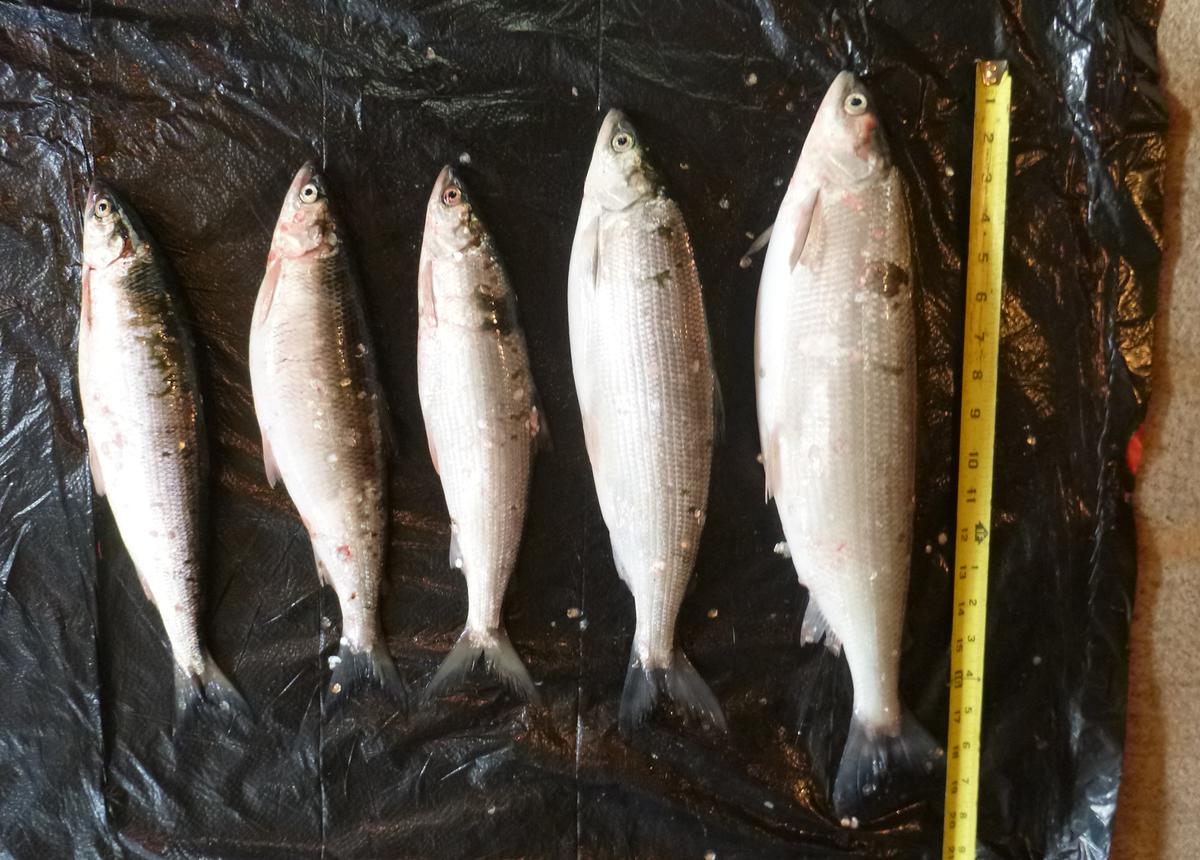 Cisco: Cisco (also called Lake Herring) are members of the salmonid family. They are common and native to Lake Superior and are also found in a number of cold, clear inland lakes in Minnesota. Cisco body forms and shapes vary in different parts of the Great Lakes. Cisco spawn in the fall, and during spawning may form large aggregations. They are harvested as a food source for humans and for their eggs (roe), which is sold as caviar in the United States and overseas. They are also a major prey base for game fish, especially Lake Trout in Lake Superior.

Background: Historically, populations of Cisco in the Laurentian Great Lakes supported large-scale commercial fisheries and were the primary forage of Lake Trout during the first half of the 20th century. However, by 1970 populations had collapsed in all of the lakes. That decline was attributed to anthropogenic factors including overfishing, pollution, and introduced species. Since the mid-1980s, Cisco have staged a partial recovery in Lake Superior. Even when Cisco stocks were abundant, those large spawning stocks did not always lead to large recruitment classes, but small spawning stocks would sometimes result in large recruitment classes. Great Lakes fishery biologists continue to study the factors affecting Cisco populations and there is a renewed effort led by the Great Lakes Fishery Commission to rehabilitate Cisco in all of the Great Lakes.

Methods: The project team proposed to use three quantitative methods to investigate the relationship of biotic and abiotic factors with Cisco recruitment, including:

The proposed outreach plan includes numerous meetings with stakeholders, presentations at professional societies, peer-reviewed publications, and quantitative workshops focused on teaching the three modeling methods the researchers will be applying. Building on hypotheses established by prior researchers, the project team will look at climatic and temperature variables, indices of predators, indices of competitors, indices of spawner abundance, and measures of habitat quality.

Goal. The goal of the outreach efforts is to include as many parties in the project as possible. Lake Superior Cisco stocks are managed by various Tribal agencies, three states (Michigan, Wisconsin, and Minnesota), and Ontario, Canada. The plan is to include data from each of these management agencies. Presenting and meeting with the various groups (stakeholders, committees and commissions, and scientific audiences at conferences) ensures the project team can widely source data as well as more easily disseminate project findings. The workshops will enable others to use these methods in different lakes and/or species as well as fostering greater understanding of the results from this specific project. The project team believes this multi-pronged approach will increase participation in the data sourcing for this project; increase the probability that results lead to action (e.g., by focusing future research efforts or informing management regulations); and grow capacity for similar work to be undertaken within the Great Lakes region on other commercially, economically, or ecologically valuable species.

Support for this project is provided by Minnesota Sea Grant’s 2022-2024 Biennial Request for Proposal program. Every two years MNSG awards approximately $2 million in research grants through a rigorous, competitive, peer-reviewed process. Researchers based in Minnesota, who are not federal employees, are invited to apply. Grant awards average about $45,000 per year for two years, plus a graduate research associate whose cost does not count against the project budget.

This work falls under the Sea Grant focus area of supporting sustainable fisheries within the Great Lake system. The specific goal addressed by this project within that focus area is ‘natural resources are sustained to support fishing communities and industries, including commercial, recreational, subsistence fisheries and aquaculture.’ The outreach plan seeks to ensure that resource managers and fishing communities have access to the science generated by the project team. Project results (i.e., modeling outputs) will be provided to fisheries biologists through workshops and discussions at multiple meetings in the Great lakes region. We anticipate this information will increase the understanding of factors affecting Cisco recruitment so biologists can adapt to future management needs.