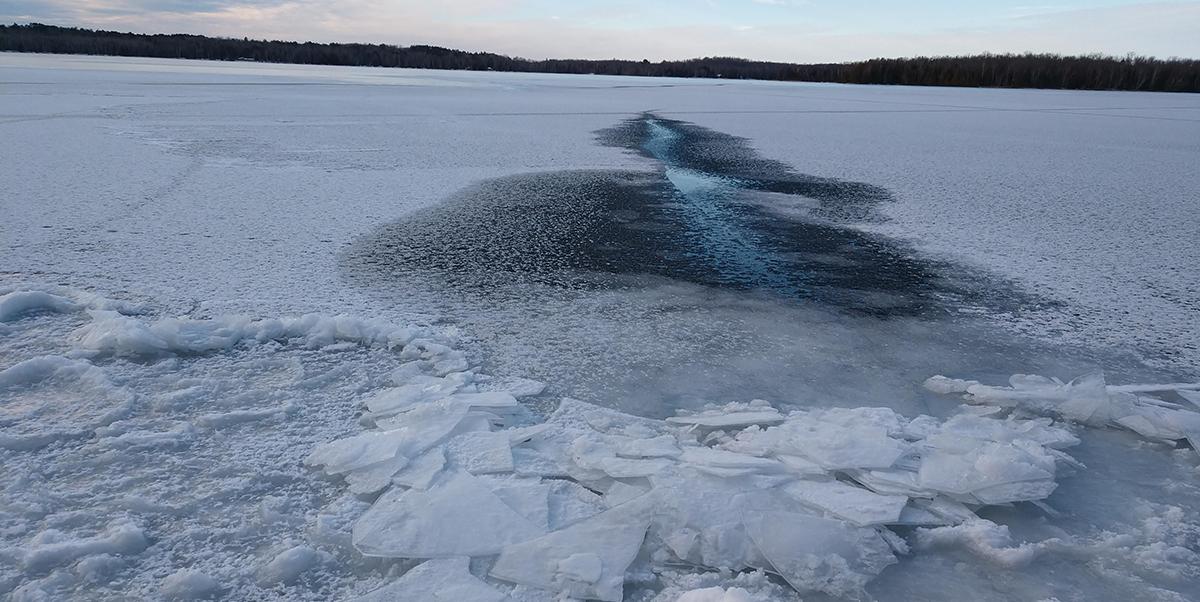 A very noisy start to winter.

If you’ve been out on or around any of our inland lakes this winter, you may have heard some pretty startling noises.

Take a listen to just a few minutes from these videos: singing ice and mystical ice. I have heard cracking, creaking, humming, moaning, whining, and sounds like thunder and this laser gun.

John Myers, a journalist from the Duluth News Tribune, called me recently to ask what makes these sounds. Here’s a bit of what I told him.

You could think of the surface of a frozen lake as a very large drumhead or a giant audio speaker. You may not perceive that the drumhead deforms and vibrates when it’s struck, but it does. If lake ice did not deform under your weight or the weight of your car, both would pass through the ice as it shatters. Because ice deforms, you and your car are able to ‘float’ on the ice atop the water (see 'Floating your Truck on a Lake'  in my February 2021 column on Lake and River Ice Formation). Any abrupt change in the ice will create a vibration of the ice surface that will vibrate as it damps out due to friction with the air and water.

The ice warms and cools from changes in sun and air. As it cools, it shrinks away from the sides of the lake that constrains it and as it warms it expands to push back against the shore. Because the air temperature is quite cold when the ice shrinks, the open water at the edge freezes so when the air warms again the ice can only push against the shore. So, it ratchets larger and larger as it contracts and freezes. The average daily temperature range for northern Minnesota in December and February is about 20° F but it can be as high as 40° F. For a round lake of about a mile across, warming 20° F would expand the ice sheet by about four feet. That expansion causes the ice to crack and deform and this causes vibration of the ice that you hear as sounds. Likewise, when it cools again it will contract, crack and deform making similar sounds. Warming by 40° F would expand the ice by almost 10 feet- that force needs to be dissipated somehow so singing and growling ice are the result.

Some people have puzzled at why the sounds are not as pronounced in the dead of winter. I think there are three reasons. First, the ice is thicker (a yard or more thick prior to climate warming) so it takes more force to fracture it. Think about breaking a yard stick versus breaking a two-by-four. Second, the ice sheet is heavier so it takes more force to vibrate it. Think about the sounds you would get from putting a yard stick and two-by-four on a counter and twanging them. Third, the ice is usually snow-covered and this acts to deaden sounds. Of course, in the spring when daily temperatures weaken the ice sheet, new sounds start up, including my favorite, the jingling of candle ice.